The late eighteenth century saw the removal of the Walls of Limerick (1761) and the construction of the New Bridge (1762) crossing the Abbey River. Edmund Sexton Pery saw the opportunity to create a new town on his ancestral land along the River Shannon. He developed a plan for a town on a grid. The first streets on this grid were completed in 1791 by the Arthur family, who named the streets of Arthur’s Quay, Francis Street, Ellen Street and Patrick Street after members of their own family. Patrick Arthur died on Francis Street in December 1799, aged eighty-three years.[1]

Originally, numbers 9-11 Patrick Street were erected in the style of the time, as three separate Georgian red-brick buildings. The first known business operating out of number 9 Patrick Street was the San Souci Hotel. This establishment was mentioned in 1802 as the previous use for the building, when Martin Creagh opened his grocery and spirit store there.[2]

The first known occupier of number 10 was Edward Poe, saddler, who advertised his store in March 1796. The following year, his wife died in their home on Patrick Street. He continued his business there until at least 1800. The first known business operating out of number 11 was Samuel Harding’s woollen drapery in 1799, which sold, among other items, “Gentlemen and Servants’ Hunting-Caps”.[3]

In 1807, a person by the name of Dwyer sold “prime yellow buck and does’ skins, of a very superior quality” at number 9. Lancalot Ryan operated out of number 11 until 13 April 1807, when his stock included “Breeches Stuffs; Ladies’ and Gentlemen’s Beaver and Silk Hats, and Bonnetts”.[4]

The Commissioners collected rates to finance these improvements. The earliest intact rate book is held by the Limerick Archives from 1814. The rate payers for 9-11 Patrick Street that year were

These men were of the merchant class, lived in the buildings, and had been there for at least the previous two years. The buildings continued to change hands often, although the businesses carried out in them remained similar.[5]

In 1824, the following occupied the buildings

In 1828, two brothers, Thomas and Paul Fogarty, opened a drapery at number 9. They called it the English Woollen Warehouse, and stayed in the building for fifteen years. Also in the business was their brother John Fogarty, who died in Patrick Street in 1832, possibly from the cholera epidemic which was rampant in the city that year.[7]

The next occupier of number 9 also worked with cloth. This was Kerry Tidmarsh, a cloth merchant who opened his store in 1843. In May 1846, strangely, he married Jane Stenson twice, a few days apart, first in St Michael’s Church, Denmark Street, and then in St Senan’s Church, Killaloe, both Roman Catholic churches. Two years later, Tidmarsh retired from Limerick. The last of the clothing merchants in number 9 in the nineteenth century was Norman’s Woollens and Tailoring in the early 1850s.[8]

In 1853, Andrew Tracy opened his grocery and spirit store in number 9. He was previously based in Francis Street. In March 1856, his seventy-five-year-old sister, Mary Tracy, died in the home they shared at number 9. Soon after her death, Tracy decided to retire, selling all his household and business goods at auction. Andrew Tracy only moved one block away to Rutland Street, where he died in January 1865, aged ninety-two years. He had a “long connection with the Town Hall Reading Room, as one of its oldest members, made him a favourite with all classes who resorted same”.[9]

Meanwhile, next door at number 10, the first known woman’s name became associated with the buildings in 1843. She was Mrs. Ann Cudmore, a member of the gentry, who lived upstairs at number 10 until at least 1845. She was part-owner of a flour mill in Ballyclough near Castleconnell, which she leased out monthly. In 1845, Joseph Hallowell’s haberdashery occupied the ground floor.[10]

By April 1846, Matthew Ryan had taken over the entirety of number 10, using the ground floor as a grocery, confectionery, and restaurant next door. That year, shocking news came out of the house, when an eight-year-old chimney sweep, Michael O’Brien, died after becoming lodged in the chimney. The master sweep was found guilty of manslaughter. It took almost twenty years before children under the age of ten were banned from working as chimney sweeps. Ryan stayed in the house, continuing his business there for twenty-four years.[11]

Number 11 was occupied by the O’Gorman brothers from at least 1838. The brothers, John Francis and Patrick, used the building as a booksellers and stationery store. John Francis also acted as an insurance agent. John Francis died in the house in 1863 by which time it was a Catholic book repository and stationery shop. His obituary mentioned his “career through life was characterised by charitable and kind acts, [he] leaves a sad blank in the society in which he moved.” Within four years, Joshua Jacob had moved his tea dealers and Italian warehouses into number 11.[12]

By December 1856, Michael Egan, a grocer, occupied number 9. In 1870, he expanded into Matthew Ryan’s store next door. This was only the beginning of Michael Egan’s growth, as he would take over Joshua Jacob’s store at number 11 before redeveloping all three buildings into one.[13] 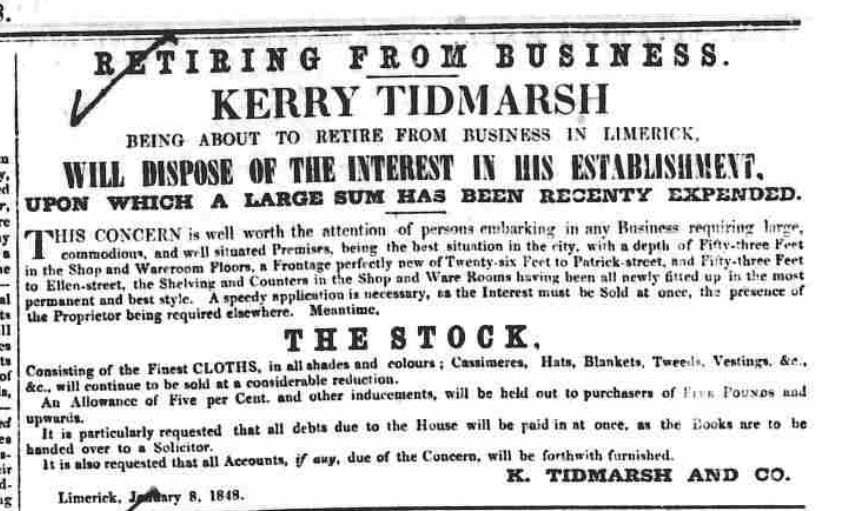 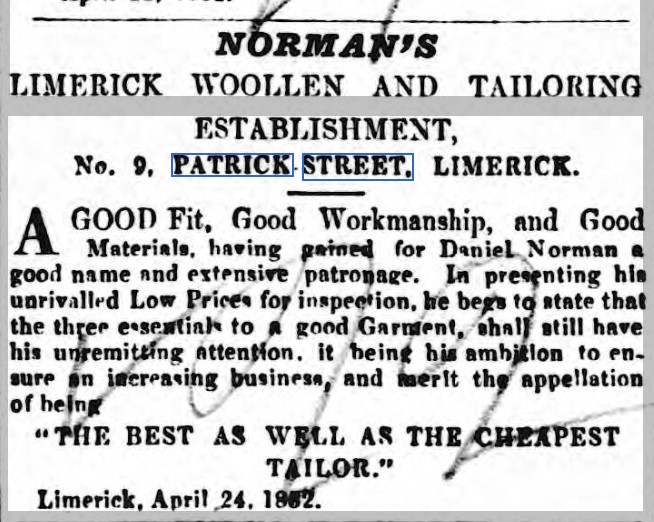 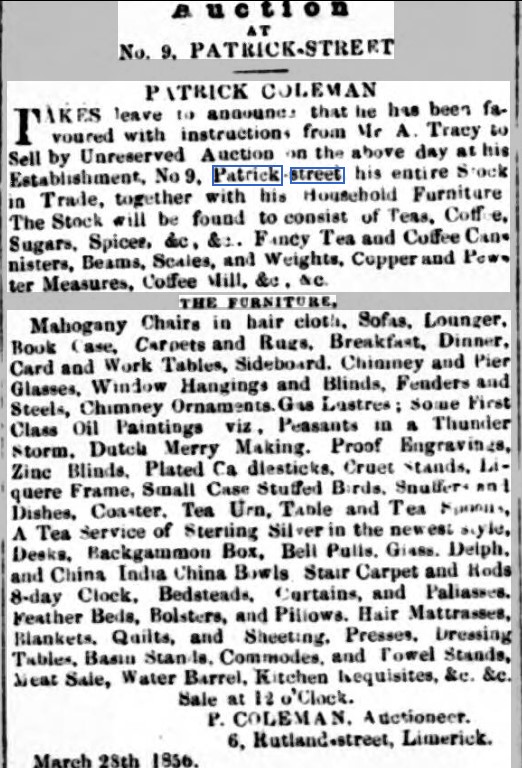