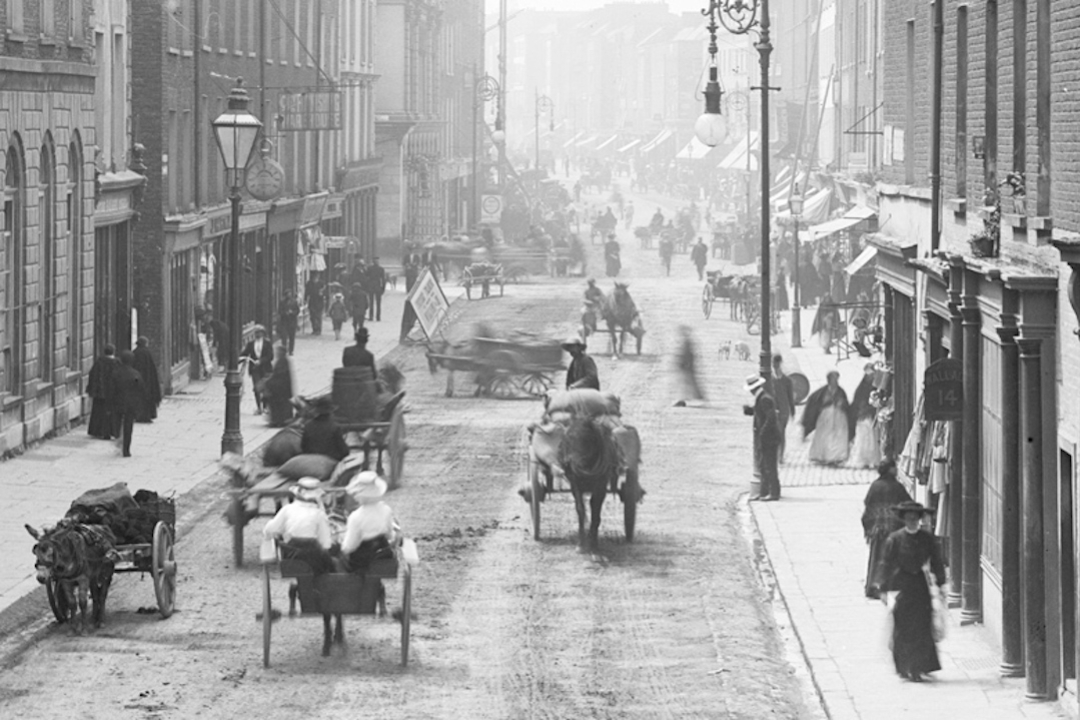 Michael Egan was born around 1831, in Ashroe, Newport, on the border of Limerick and Tipperary. As a young man, he apprenticed in a grocery business in the city. In 1856, unsatisfied with being an employee at the age of 25, Michael opened his own grocery store at 9 Patrick Street. An advertisement dated 1 July 1856 in the Limerick Reporter reads: “New Tea Warehouse. Michael Egan begs to announce to his friends and the public that he opened his extensive grocery, wine and spirit concerns. No, 9 Patrick-street, (corner of Ellen-street.)”.[1]

This was quickly followed by advertisements of the stock held in his tea warehouse. These included Lapsange Congou, Pekoe Souchong and Hyson teas. As well as ‘Plantation’ and ‘Jamaica’ coffees. In addition to the teas, he stocked a variety of wines, whiskey and bottled liquors. He also sold raw and lump sugar. Throughout the rest of the 1850s and 1860s, Michael Egan had weekly advertisements in the local press highlighting the stock in his premises on Patrick Street and Ellen Street. In 1866, he was selling Devonshire Cider, Bass & Co.’s East India Pale Ale and Guinness’s XX Porter.[2]

In 1868, a fire broke out in his dry store and the cooperage behind his store on Patrick Street or possibly on Ellen Street. This store was connected to a government bonded warehouse with over forty thousand pounds worth of whiskey, wine, brandies and teas. The roof of Michael Egan’s dry store was opened and for over two hours water was poured in to avoid the fire spreading to the bonded warehouse. Egan’s back buildings were completely destroyed.[3]

In 1870, the two adjoining buildings, number 10 and number 11 Patrick Street, were occupied by Matthew Ryan, a confectioner, and Joshua Jacob, who ran a tea dealers and Italian warehouses. Within a few short years, Michael Egan had expanded his business, taking over all three buildings. He hired Patrick Kenna, a builder on Henry Street, to demolish the three buildings and erect a new purpose-built structure. This was completed prior to October 1876. The building was possibly designed by William Corbett, the city architect, or William Fogarty. It would take another three years before the local trade directories would include details of this expansion.[4]

In 1879, his brother, Thomas, was included in the listings as a grocer at 9, 10 and 11 Patrick Street.  Thomas followed Michael into the city and worked as a commercial traveller for Michael. When he was only twenty-nine years old in 1881, Thomas passed away in Michael’s city home at 25 Upper Mallow Street.[5]

Michael went on to open multiple branches of his company in Ireland and England, including one at 62 and 63 Great Tower Street, London. His London store specialised in Irish whiskey. In 1880, he closed the Killaloe branch of his business, which was on the corner of Bridge Street facing Ballina Bridge and included a licensed shop, dwelling house and store. He ran a business there for “a considerable number of years”.[6]

On 25 October 1863, while living in Patrick Street, he married Anne Frances Ryan (c. 1840-1911) the only daughter of Michael Ryan from Athlunkard in Clare. The couple married at Rathmines Roman Catholic Church in Dublin. They had twelve children, of whom eight survived to adulthood.[7] Anne Frances and their children lived primarily in her family home of Clare Cottage in Athlunkard. This large, square, eighteenth-century, one-storey, five bay, hip-roofed house was on the Clare side of Corbally with a view of the River Shannon.[8]

Outside his business life, Michael was a devoted Catholic, and an annual subscriber to the Redemptorist Church fund and the Franciscan Church fund. In 1873, he donated a case of Champagne to the Magdalen Asylum bazaar to raise money for the Good Shepherd Convent in Limerick. He also sponsored other activities in the city. In 1864, he was one of the subscribers to Maurice Lenihan’s History of Limerick. In 1883, he supplied wines at the Royal Agricultural Society’s show. Michael Egan was a Governor on the Board of Barrington’s Hospital and St. John’s Hospital. He was also a member of the Limerick Chamber of Commerce.[9]

His health began to fail a year before his death, and he took a step back from running his businesses. His sons, Michael S. Egan and John Francis Egan, stepped into the role of daily managers. Michael Egan passed away on 6 December 1899 of pneumonia, in the House of St. John of God in Stillorgan, Dublin. His remains arrived from Dublin the next day. His funeral took place at St Michael’s Church on Denmark Street, and he was buried at Mount Saint Lawrence Cemetery. He left effects worth £27,848, seventeen shillings and two pence in his will.[10]

The businesses continued for almost a half a century under the guidance of his sons, primarily Michael S. Egan. In 1934, the brothers let out the ground floor of 10 and 11 and the upper floors of 9, 10 and 11 Patrick Street to Kingston Clothing Works. That same year, Michael S. Egan opened a public house on the ground floor of number 9 and the basement of 9, 10 and 11 Patrick Street. John passed way in 1950, and two years later Michael S. transferred the alcohol licence associated with the building to Joseph Brendan Egan.[11]

On 9 May 1953, the entire building was consumed by fire. This impacted all three businesses trading there at the time, Anthony O’Donovan Ltd. tailors, O’Brien & Co. Ltd. clothing manufacturers, and Egans. Michael S. Egan passed away in 1954 in Limerick. The fitting for Egan’s basement bar were sold the following year. In 1956, the Egan family home of Clare Cottage was sold. This brought to an end to 100 years of the Egan family in what is now Ormston House.[12] 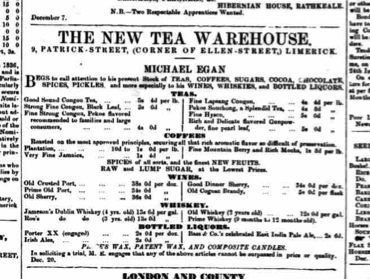 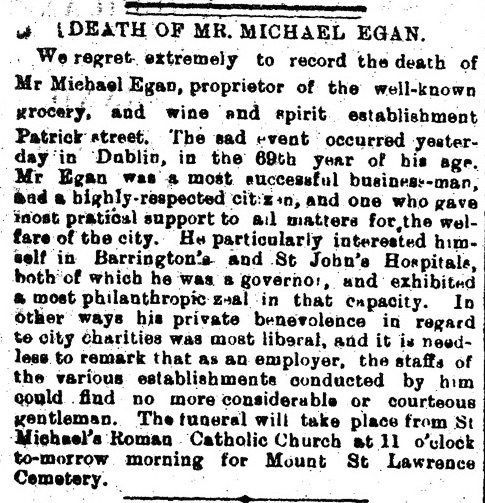 [4] Henry & Coghlan’s General Directory of Limerick, (London, 1867), 379-393; Munster News, 25 October 1876. In regards to a building for sale 61 William Street: “Opposed to repairs, these premises have been entirely re-built from the foundation, on design by William Corbett Esq., C.E., City Architect and Surveyor, whose specifications were contracted for at one thousand pounds, by Patrick Kenna, Builder, who has so distinguished himself by the erection of the magnificent premises in Patrick street, for Michael Egan, Esq.”; John Logan, Who designed Ormston House?: “A possible candidate is William Fogarty, a Limerick man, who would be elected president of the Royal Institute of the Architects of Ireland in 1876”.

Image: photograph of Patrick Street from Rutland Street taken between 1880 and 1914, sourced from the Lawrence Collection at the National Library of Ireland on the Commons.