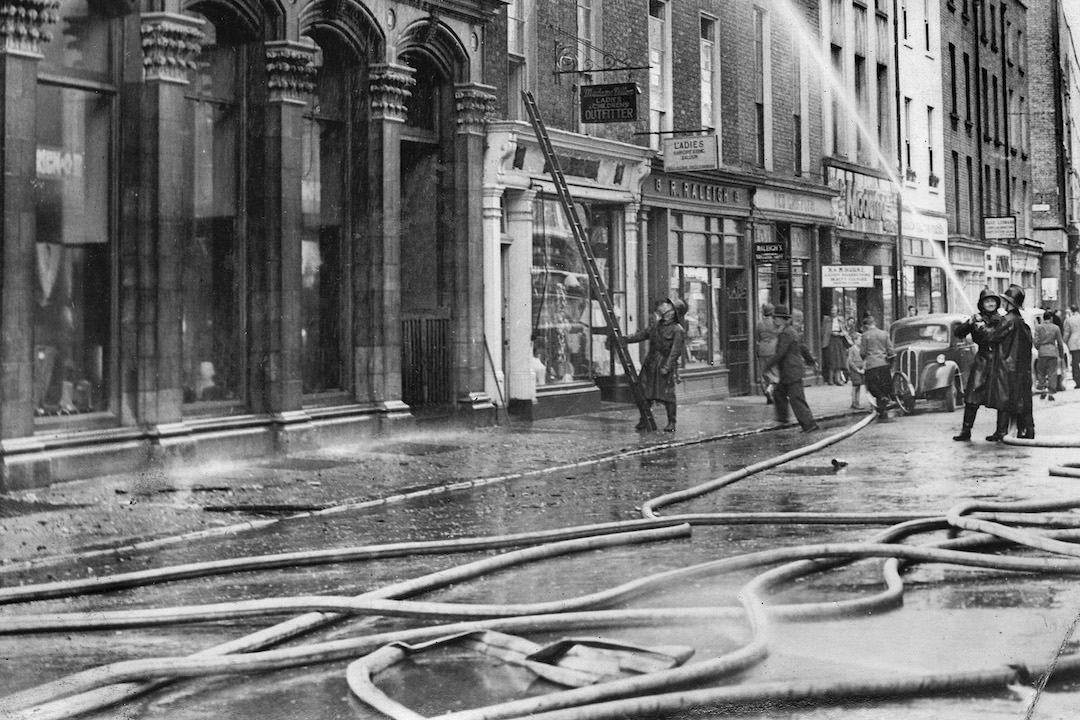 The 1920s were a period of strife and change in Ireland that ultimately resulted in the country becoming an independent state. This led to changes in commercial enterprises in Ireland, as new laws and taxes were introduced. Limerick saw a spike in activity in the late 1920s with the development of the Shannon Hydroelectric Scheme and an influx of workers from all over the world.

Once the development was finished, a void was left in the city as thousands of men returned home. This, coupled with the Anglo-Irish Trade War (Economic War) of 1932-1938, caused an economic downturn in the city.

The Egan family were not immune to this slump. In 1934, they began leasing out sections of their building while continuing to use the ground floor of number 9 and basement of numbers 10 and 11 as licensed premises. They also used it as an address for Miss K. Egan, the secretary of a fencing school.[1]

The Egans’ first tenant was Patrick King of Kingston Clothing Company. He took over the ground floors of numbers 10 and 11 and the upper floors of all three addresses. Two years later, another clothing store, O’Brien & Co., sublet number 11 from King. In 1937, after only three years, Kingston Clothing Company relocated but continued to sublease the spaces until 1941. O’Brien & Co. expanded to the ground floor of both numbers 10 and 11.[2]

Meanwhile, Anthony O’Donovan Ltd., a tailoring company, opened a factory on the first floor of number 10 on 21 October 1936. O’Donovan’s stayed there for five years before moving out for three years. They returned once again in 1944, taking over two floors of number 10.[3]

On 9 May 1953, tragedy struck when a fire broke out in the building. It was thought the fire began after something was left plugged in at O’Donovan’s. The fire consumed the businesses of Anthony O’Donovan Ltd., O’Brien & Co. Ltd. and Egans’. The fire caused the loss of 115 jobs and an estimated €100,000 in damage to goods and machinery. The military assisted the fire brigade in bringing the fire under control. An appeal went out to the public to help raise funds for those who found themselves unemployed by the disaster. Anthony O’Donovan Ltd. returned to the building after it was reconstructed. O’Brien’s & Co. Ltd. relocated, and Egans’ sold their bar fittings and closed the business.[4]

Anthony O’Donovan Ltd. continued to occupy the entire first floor until 1959 as a showroom. The O’Donovan family were part of the hereditary Guild of Tailors in Limerick. (In 1918, Anthony O’Donovan and his wife opened a tailoring business, making twelve suits per week over a shoe shop in 27 Patrick Street.) The O’Donovans left Patrick Street for five years from 1944-49. During that time, they created the trademark Danus. Danus stood for Donal, Anthony, Noel and Us – referencing the women managers of the company. This part of their company was based in Dominic Street from 1953.

The firm E. J. & T. N. McCarthy Ltd. was established on 20 November 1952. They were responsible for the reconstruction of the building after the fire. They opened a motor showroom on the ground floor of the building in October 1956. On opening day, they had a Ferguson 35 tractor on display in the space. It had been in a mysterious case for a week.

The McCarthys were cousins who also owned the Shannon Oil Company. The McCarthys had a variety of vehicles including motorcycles and small three-wheeled cars called “bubble cars” on display. While the McCarthys were in the building, children would run through the building, in one door on Ellen Street and out the other on Patrick Street, between the vehicles, trying not to get caught by the owners. The McCarthys left Patrick Street in 1961 and stopped trading in 1987. For a brief period in early 1956, another motorcycle company J. & J. (Limerick) Ltd. displayed their vehicles in the building.[5]

Na-Prie was operated by Fredrick W. Napier. Fredrick, a native of Bristol, England, came to Limerick to work in the Limerick Shoe Factory. In 1938, he married Limerick woman, Mona Doherty, in St. John’s Cathedral. Interestingly, Mona started the Chimney Cleaning Service – a female chimney sweep was rare. It was in operation before 1952, when she began including window cleaning in her service, and it was still in operation in 1966. Frederick died in 1978 and is buried in Mount Saint Lawrence Cemetery. Their son, Howard Napier, attended the Presentation Convent School, Sexton Street and Rockwell College, Dublin. He was an avid motor enthusiast.[7] 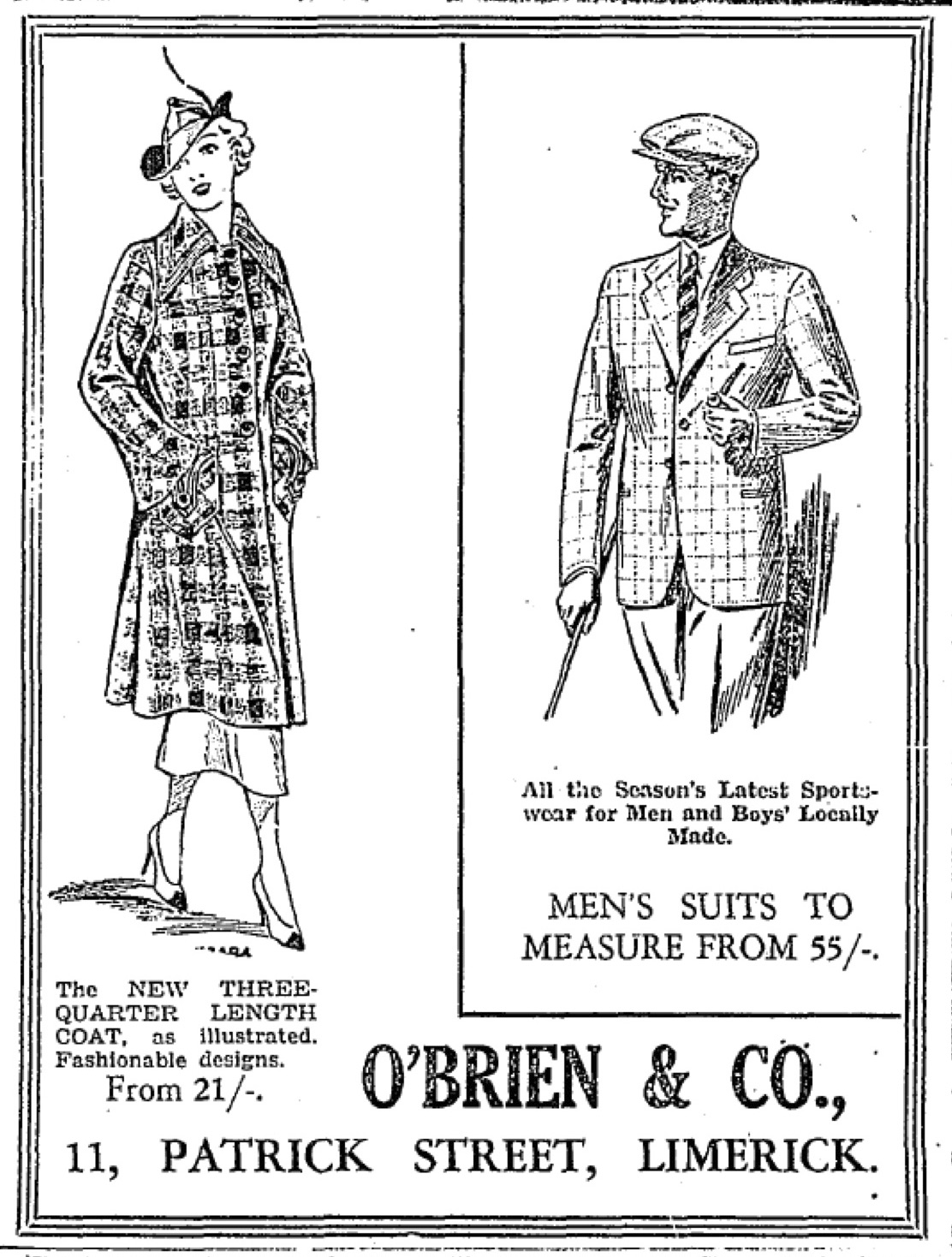 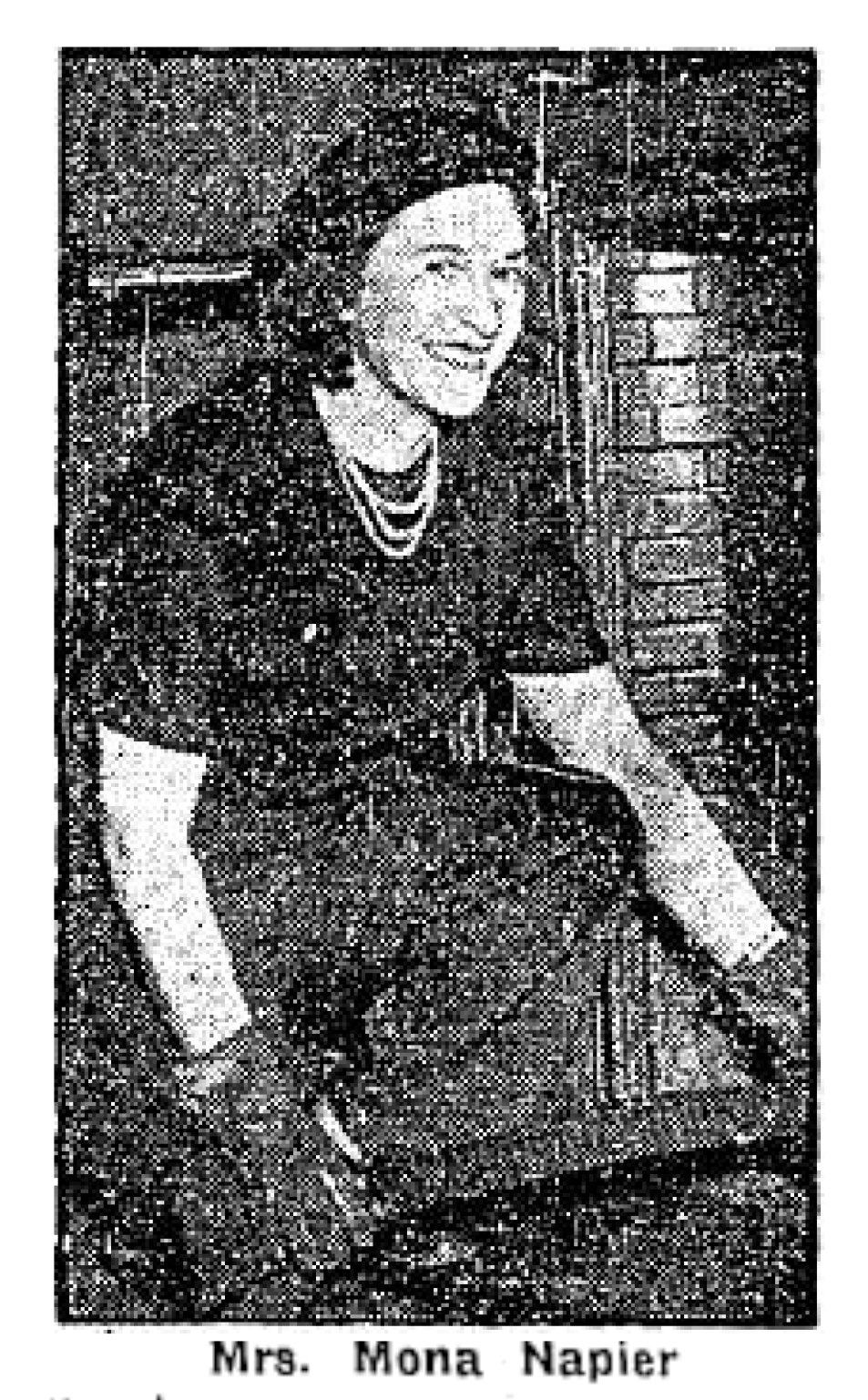 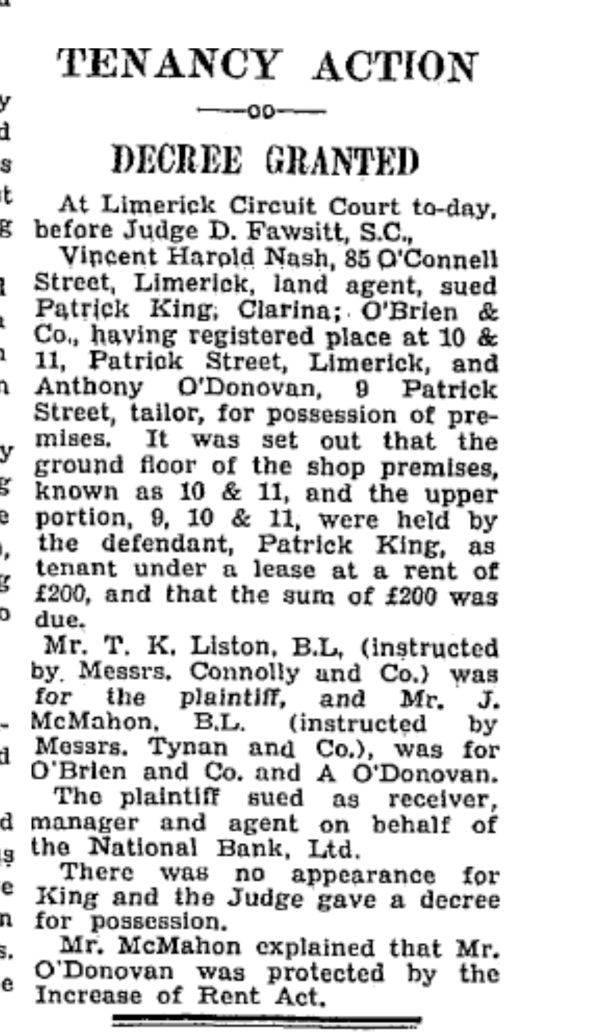 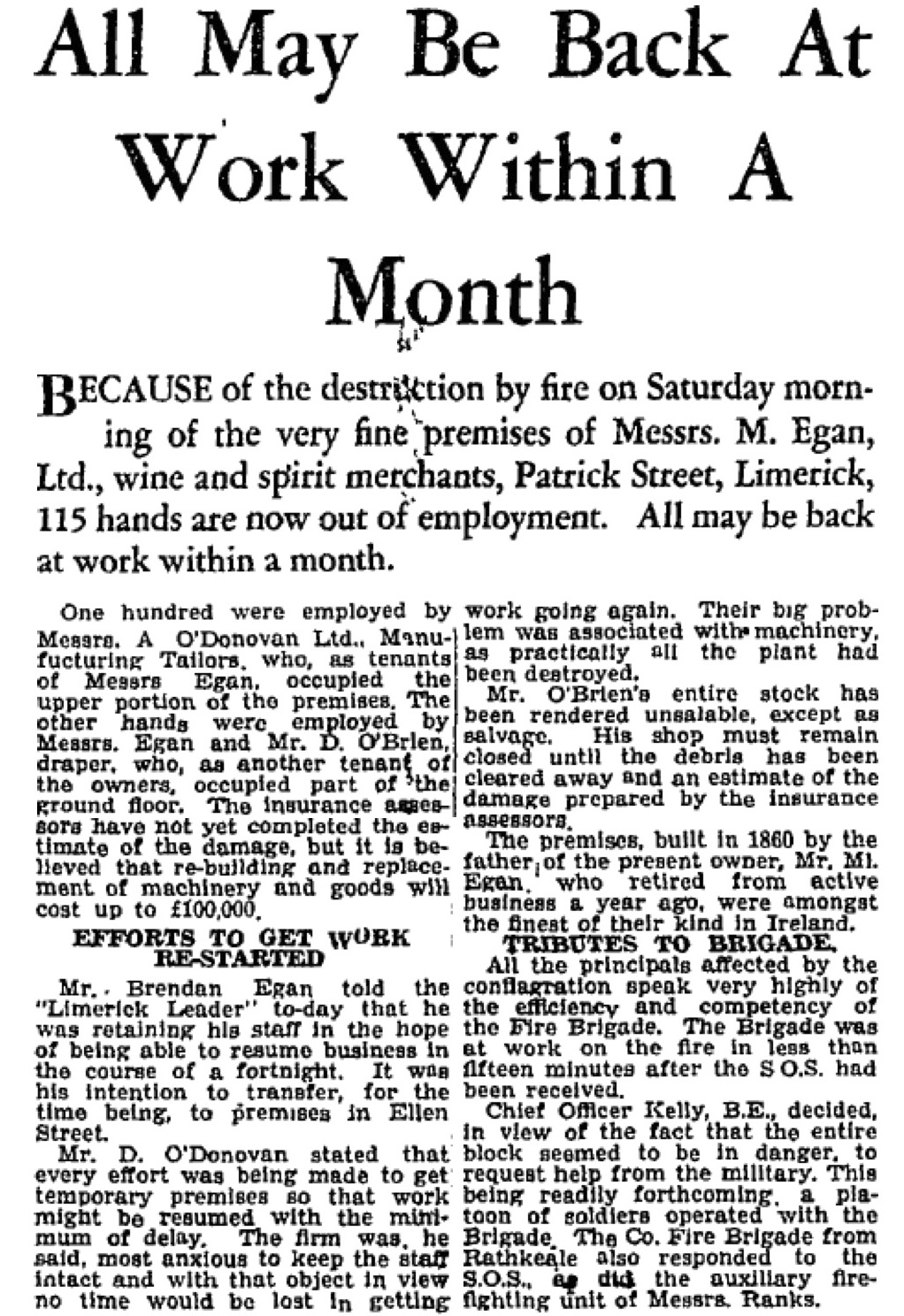 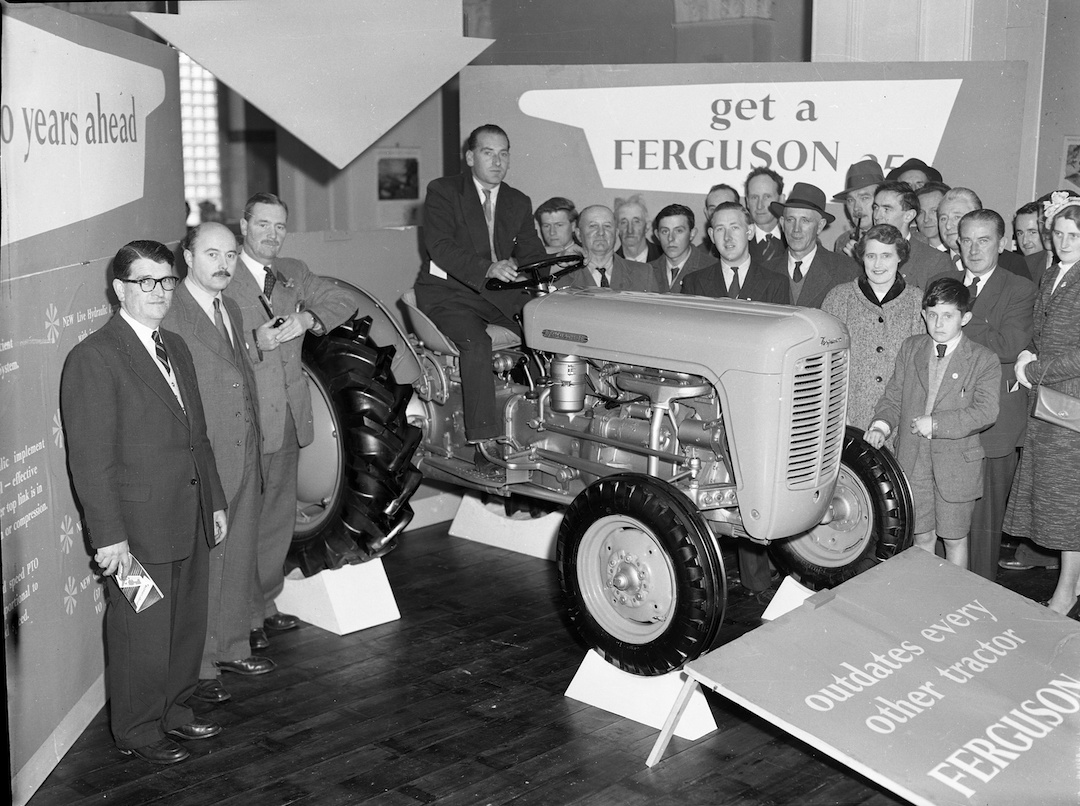 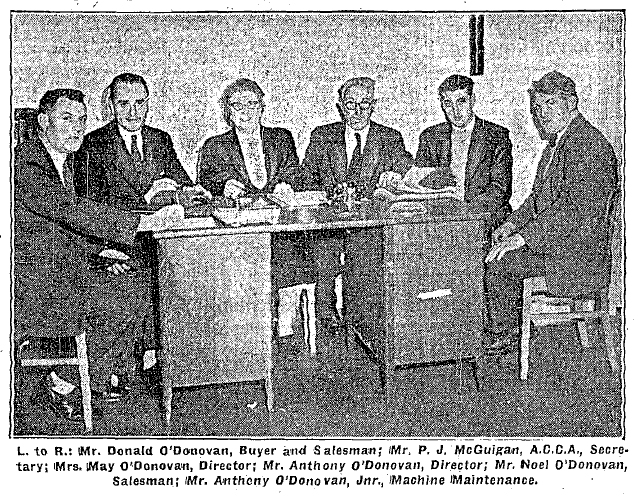 Image: photograph of the fire brigade on Patrick Street in 1953, thanks to Seán Curtin Sr.