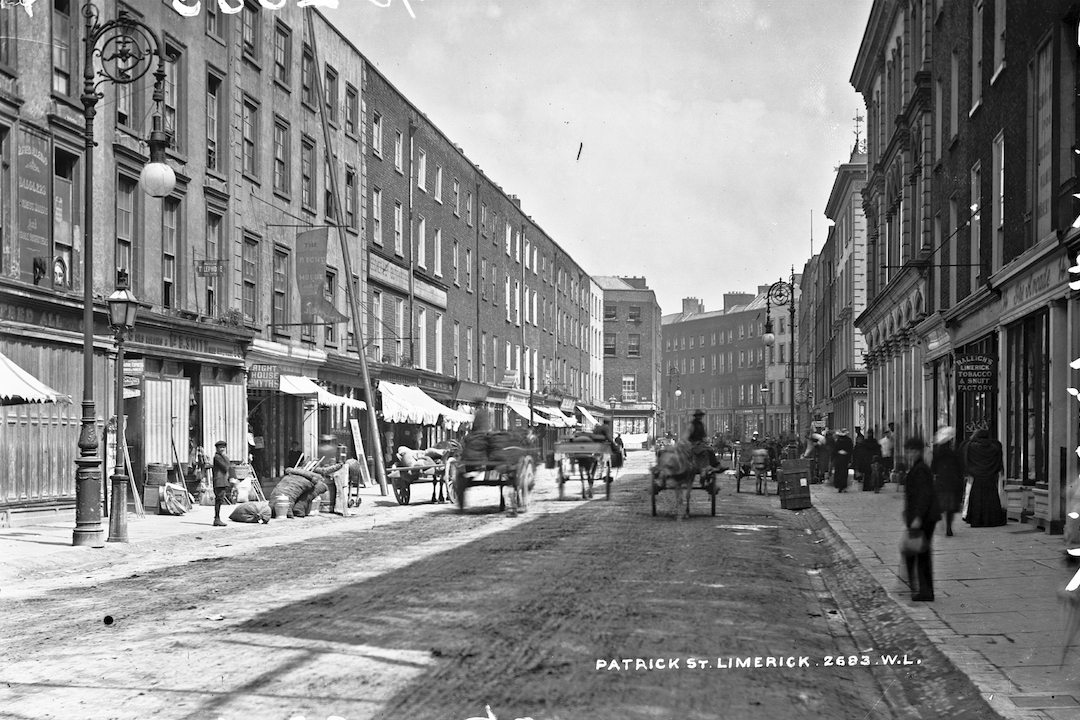 National Heritage Week is an initiative of the Heritage Council of Ireland bringing together communities to build awareness of the value of our heritage and to support its conservation. This year, Ormston House presents two virtual projects by Sharon Slater to celebrate local stories and trails: a social history of 9-11 Patrick Street, the address of the unique Ormston House building, from 1796 to today, and a new update for the Women of Limerick mobile phone app, highlighting public artworks by women in the city.

The history of Ormston House

“Who was Michael Egan and why did he erect such an ornate building on the corner of Patrick and Ellen Street?” Sharon Slater has been researching the history of 9-11 Patrick Street and our unusual building which was inspired by the Venetian palazzo. Drawing on local and regional newspapers, as well as advertisements and trade directories, she has pieced together the timeline, from the first business registered at 9 Patrick Street, the San Souci Hotel, to today’s Cultural Resource Centre. The history of the building has long been an inspiration for our artistic programme and we have created a special page on our website to be published during National Heritage Week.

Women of Limerick was developed to remember and celebrate women from Limerick’s history. Launched in 2021, Sharon Slater has mapped thirty women across the city to mark their contributions to the arts, education, health and politics, both locally and around the world. For National Heritage Week, she has created a new layer on the map, locating public artworks by women artists. From modest interventions to large-scale commissions, the selection of ten permanent artworks, at prominent sites and hiding in plain sight, creates a new walking trail through the city. You can download Women of Limerick for free from the Apple Store here and from Google Play here. The Public Art update will be published during National Heritage Week.

Sharon Slater was named National Heritage Hero in 2017 by the Heritage Council of Ireland. She is currently Historian-in-Residence at Ormston House, and is advising on a range of artistic commissions and creative projects. For over twenty years, Sharon has been researching the history of life in Limerick, and she holds an MA in Local History from the University of Limerick. She is the author of multiple publications, most recently The A-Z of Curious County Limerick (2021), and has worked with media organisations in Ireland and abroad. She has received numerous awards for her work, and was honoured by a Mayoral Reception at City Hall.

National Heritage Week takes place from 14-22 August 2021. You can find the full programme here. Photograph from the Lawrence Collection taken of Patrick Street between 1880 and 1914, sourced from the National Library of Ireland on the Commons. Ormston House (as it is known today) is located at the first street corner on the right-hand side, past Raleigh's Limerick Tobacco & Snuff Factory.
Back to Programme