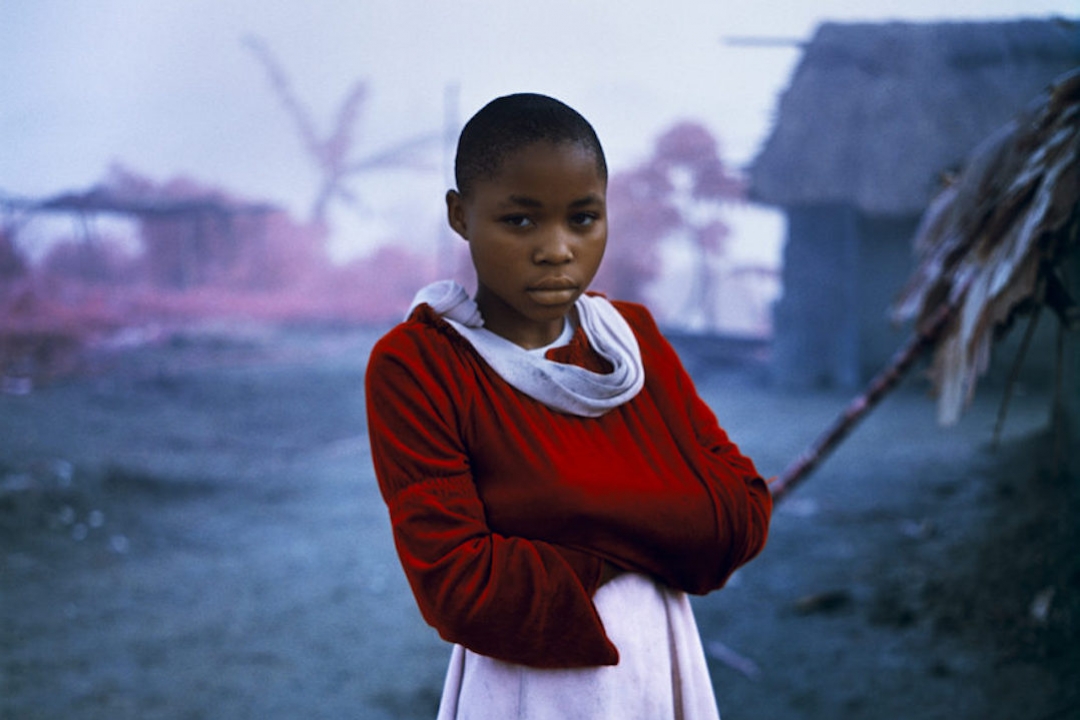 Throughout 2012, Richard Mosse and his collaborators Trevor Tweeten and Ben Frost travelled in eastern Democratic Republic of Congo, infiltrating armed rebel groups in a war zone plagued by frequent ambushes, massacres and systematic sexual violence. The resulting installation, The Enclave, is the culmination of Mosses’ attempt to radically rethink war photography. It is a search for more adequate strategies to represent a forgotten African tragedy in which 5.4 million people have died of war-related causes in eastern Congo since 1998.

A long-standing power vacuum in eastern Congo has resulted in a horrifying cycle of violence, a Hobbesian ‘state of war’, so brutal and complex that it resists communication, and goes unseen in the global consciousness. Mosse brings a discontinued military surveillance film into this situation, representing an intangible conflict with a medium that registers an invisible spectrum of infrared light, and was originally designed for camouflage detection. The resulting imagery, shot on 16mm infrared film by cinematographer Trevor Tweeten, renders the jungle war zone in disorienting psychedelic hues of vivid magenta, lavender, cobalt, and puce. Ben Frost’s ambient audio composition, comprised entirely of organic Congolese field recordings, hovers bleakly over the unfolding tragedy.

“I am beginning to perceive this vicious loop,” Mosse wrote from Goma, “of subject and object. The camera provokes an involuntary unraveling, a mutual hijack of authorship and autonomy.” Neither scripted nor directed, Congolese rebels return the camera’s predatory gaze in a distinctly confrontational and accusatory manner. The lens seems to mesmerise and provoke those it encounters in The Enclave, including rebels fighting under the command of those sought for trial by the International Criminal Court. This precarious face-off reveals inherent ambiguities of masculinity, defiance, vulnerability, and indictment.

The Enclave immerses the viewer in a challenging and sinister world, posing aesthetic questions in a situation of profound human suffering. At the heart of the project, as Mosse states, is an attempt to bring “two counter-worlds into collision: art’s potential to represent narratives so painful that they exist beyond language, and photography’s capacity to document specific tragedies and communicate them to the world.”

Richard Mosse represented Ireland with The Enclave, a major new multi-media installation at the 55th International Art Exhibition – La Biennale di Venezia, The Pavilion of Ireland from 1 June – 24 November 2013. The Commissioner and Curator is Anna O’Sullivan, Director of the Butler Gallery, Kilkenny, Ireland.

The Enclave will be exhibited at Ormston House and 6a Rutland Street, Limerick from 27 March - 5 May 2014, as part of Limerick National City of Culture 2014. Ireland at Venice is an initiative of Culture Ireland in partnership with the Arts Council/An Chomhairle Ealáion. Image: Richard Mosse, Wrap Your Troubles In Dreams, North Kivu, eastern Congo (2012), courtesy of the artist and Jack Shainman Gallery, New York. www.richardmosse.com
Back to Programme