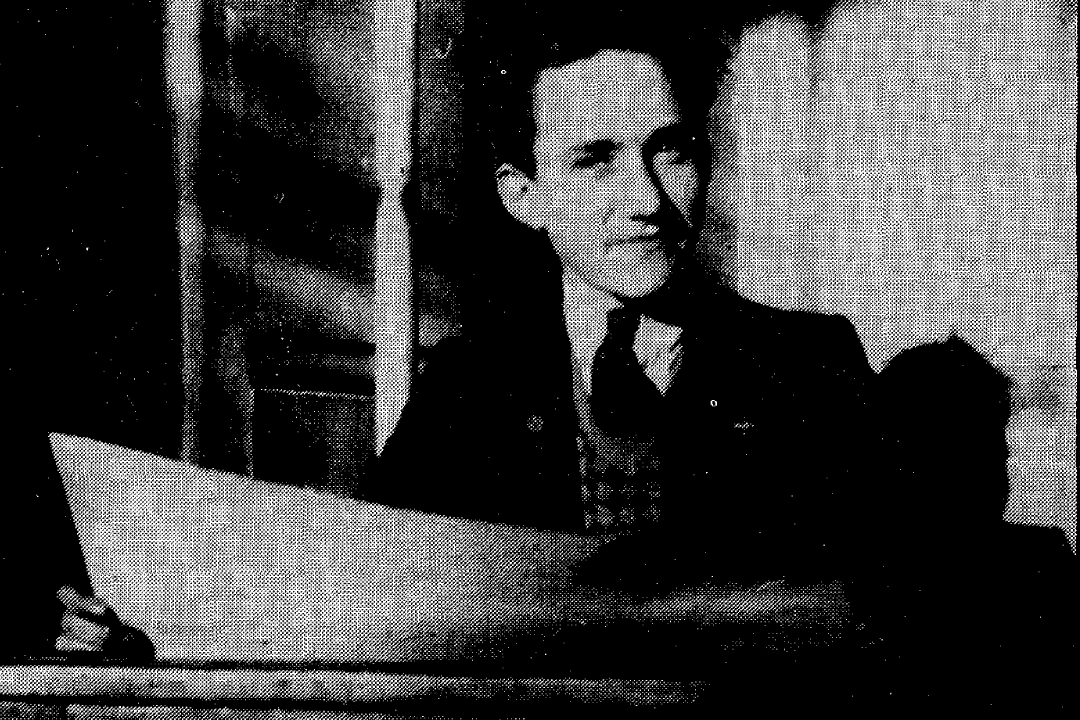 The year is 1934. Extraordinary events are unfolding in Limerick city as a radio pirate takes control of the local airwaves. Ormston House proudly presents The Pirate, a new radio documentary by Peter Curtin, commissioned for Engine of Hell. Please join us for a live listening event with Peter Curtin and Irish pirate radio historian, Eddie Bohan, on Friday 25 March, 7-9pm. No booking required.

Jim O’Carroll, an aspiring electrical engineer, became one of the first radio pirates in Ireland when he discovered he could transmit a signal across the city. Broadcasting each night from a friend’s attic, the City Broadcasting Service (CBS) was born. The broadcasts were hosted by Jim, under the moniker Billy Dynamite, his friend Charlie O’Connor aka Al Dubbin, and their pal Mikey Madden. They played records from Jim’s collection, read out the headlines from the newspapers, had a ‘What’s On’ section, and even gave swimming lessons live on air.

In later years, O’Carroll noted: “we have exactly the same system governing broadcasting as Communist Russia – one programme, one official voice”. In a truly rebellious act, risking fines and the wrath of the law, O’Carroll chose to rail against the archaic broadcasting laws of the time with his illegal transmissions. The station became notorious and remained in existence until 31 October 1935 before finally being raided by the guards. The transmitter was seized, and Mikey, who was on air at the time, became the first person to be convicted under the Wireless Telegraphy Act of 1926. The Pirate documentary uncovers this story.

Eddie is an independent radio historian specialising in the history of Irish pirate radio. He has lectured at the University of Newcastle, the University of Luxembourg, and has contributed to various seminars and history forums on Irish Radio History, The Economics of Pirate Radio, The Sectarian Pirates of Belfast 1969-74, and at the Sarah Lundberg Summer School on Political Pirate Radio in Ireland. In 2019, he collaborated with Dublin City University to open The Irish Pirate Radio Archive. He has contributed to numerous publications and magazines, and later this year his new book on Sectarian Pirate Radio in Ulster will be published.

Peter is a radio documentary producer, DJ and record collector. He has been involved in radio for 15 years. He currently works with RTÉ Lyric FM, presents a weekly music show on RTÉ 2XM, and also hosts a show on Worldwide FM called WW Éireann. Peter curates and promotes events for the Prima Volta collective in Limerick. His radio documentary work focuses mainly on outliers from the Irish music scene of the 60s and 70s. He has made programmes for RTÉ Lyric FM about Limerick beat group Granny’s Intentions, multi-instrumentalist Jolyon Jackson, and jazz pianist Noel Kelahan. In 2018, Peter compiled and produced Buntús Rince, a compilation of Irish jazz, fusion and folk music from the 1970s as part of the Allchival series on All City Records. He is currently working on a music compilation focussing on emerging Irish artists.

The Pirate is part of a series of events and interventions at Ormston House for the project Engine of Hell. Throughout March 2022, Ormston House will be a site for rehearsal and performance. Consisting of commissioned and invited works, Engine of Hell will draw on the cultural and societal impact of music. Together, artists and contributors will explore ideas of collective action, censorship, and protest. Engine of Hell takes influence from the 1934 anti-jazz campaign in Ireland. Fr Peter Conefrey, who led the campaign, believed jazz to be an “engine of hell” imported from abroad to do the devil’s work. ‘Jazz’, in this case, referred to any music or dance that was modern, foreign and ‘other’.

Friday 25 March 2022, 7-9pm. The Pirate is commissioned as part of Engine of Hell curated by Caimin Walsh, supported by the Arts Council of Ireland. Image: Jim O'Carroll (aka Billy Dynamite) via the Old Limerick Journal. Admission is free. If you are in a position to support, please consider a donation to the Ukraine Appeal organised by Doras here or the Ukraine Solidarity Fund organised by Trans Europe Halles here.
Back to Programme