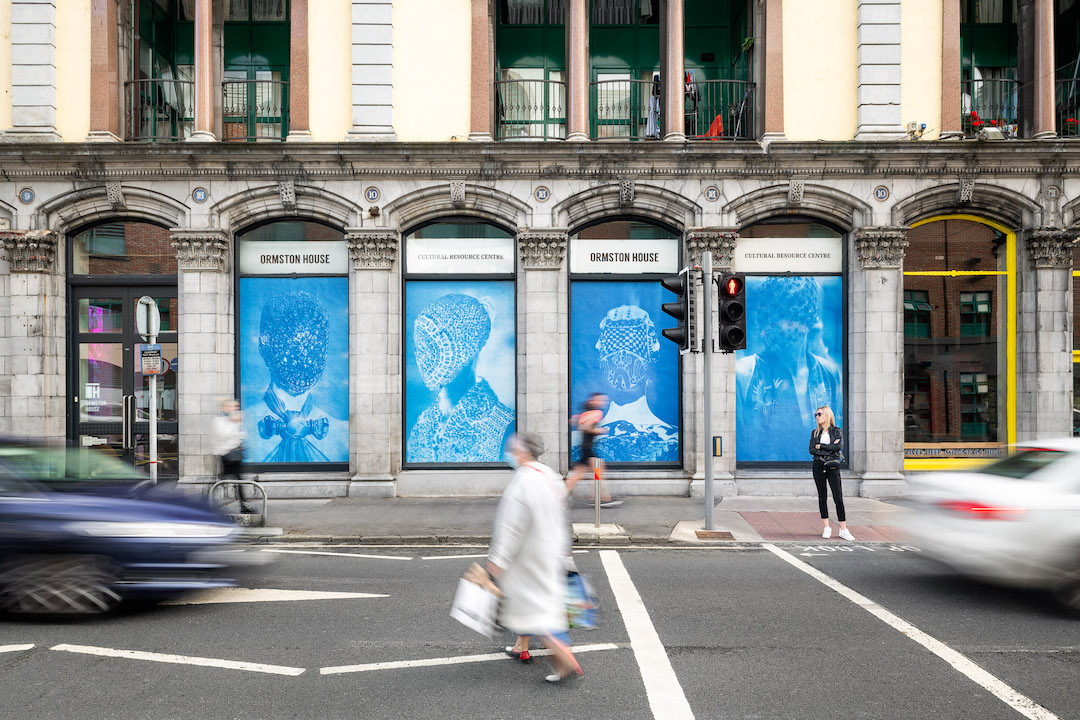 Sourced from imagery of queer activism and decadent consumerism, Blue Dyke is a series of forty sun-printed cyanotypes and digital prints by Breda Lynch. A special large-scale presentation in the windows of Ormston House was commissioned for the Feminist Supermarket bringing the artworks to the street following recent restrictions on indoor gatherings during the COVID-19 pandemic.

Blue Dyke emerged from a larger collection titled Fragments of a Lost Civilisation (2016-) which includes found, appropriated, stolen, and gifted materials engaging with apocalyptic visions, countercultural movements, and Utopianism. The artist hoards and re-works these materials over and over, embracing the deterioration or “noise” of the image, defining an aesthetic of queer failure, and conjuring a magical world of queer possibility.

In response to Blue Dyke at Ormston House, When We Move in Blue is a limited edition pamphlet on the work of Breda Lynch, written by El Reid-Buckley and designed by Oisín Ralph available here. This commission is also an acknowledgement to LGBT Youth who are questioning how and where their community is represented in the city.

Breda Lynch is an artist, curator and a full-time lecturer in Fine Art at the Limerick School of Art and Design. She holds a BA Hons degree from the Crawford College of Art in Cork, an MA in Fine Art from Chelsea College of Art in London, and an MPhil Fine Art and Digital Media from the University of Wolverhampton. Breda works across a number of mediums including drawing, cyanotype, and expanded printing techniques. Her work deals with a wide range of issues and themes such as questions of identity, particularly gender and sexualities; appropriation and reproduction; queer cultures of past, present and future; in/visibilities; subcultural and spiritual exploration; and more.

A stalwart of the art scene locally, national and abroad, Breda has exhibited in Australia, China, Iceland, Italy, Spain, Thailand, Turkey, the UK, and the USA. She has exhibited widely across Ireland, mostly recently at the Royal Hibernian Academy, Ormston House, and the Irish Musem of Modern Art. Her work is included in the collections of the Arts Council of Ireland, the Irish Museum of Modern Art, Limerick City Gallery of Art, Luciano Benetton Italy,  the Office of Public Works, and the University of Limerick. You can visit her website here.

Image: Blue Dyke (2020-2021) by Breda Lynch at Ormston House. Photograph by Jed Niezgoda.
Back to Programme

When We Move in Blue