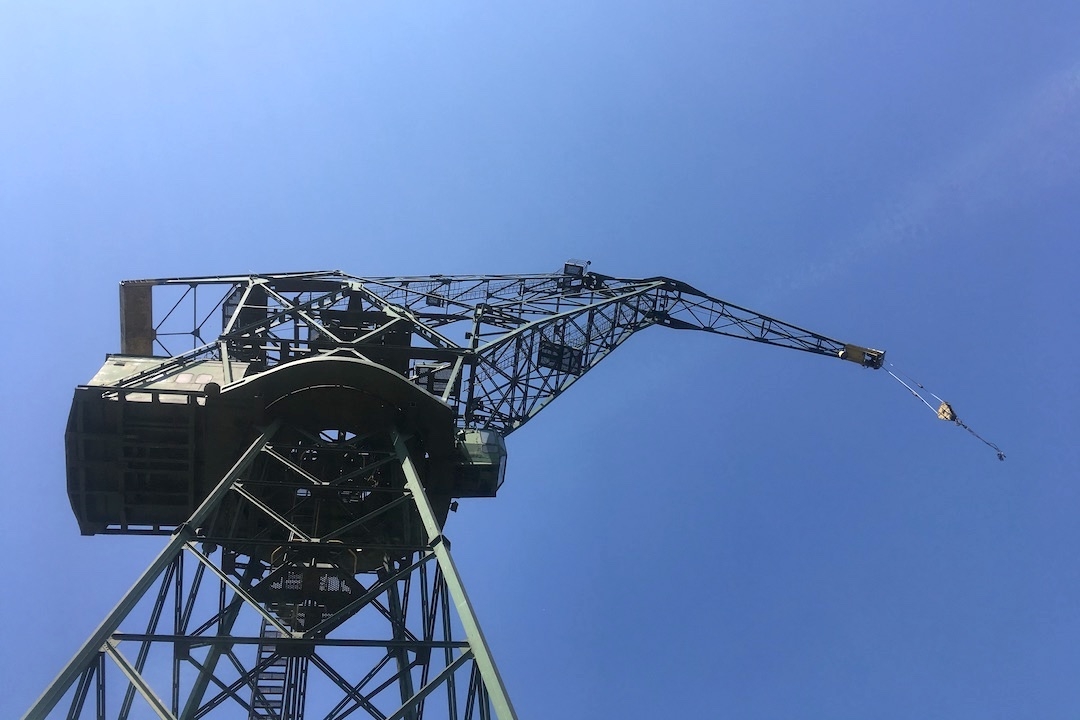 The Baltic Sea Cultural Centre will host our second artistic residency in Poland curated by Agnieszka Wołodźko and produced by Katarzyna Szewciów and Veronika Uziak for the Creative Europe project, Memory of Water. Artists from Belgium, Greece, Ireland, Poland, Scotland and Sweden will carry out artistic actions and interventions related to local cultural heritage: the former Gdańsk Shipyard will be both the subject and location of their work.

Following a research visit in June, the artists will test the potential of the post-industrial area on the quays in response to the rapid redevelopment of this part of the city. The thematic threads of their creative work will reflect the topics discussed by local stakeholders during a series of Urban Labs held at the Baltic Sea Cultural Centre on the future of the Shipyard:  Memory, Art, Water & Public Spaces, Production, Green Spaces & Ecology, and Dialogue.

Irish artist Mary Conroy will focus on the old tools used by shipyard workers. She will make casts and molds of these bygone industrial materials to create a seeded clay sculpture that will contribute to the ongoing rewilding of the Shipyard. The sculpture will be located on Martwa Wisła quay where the Forge was originally sited following the purchase of farmland in the nineteenth century. By next Spring, the sculpture will disintegrate as flowers grow from the seeds restoring biodiversity and green habitats to the area.

In a symbolic gesture, Scottish-American artist t s Beall will outline the footprint of a flower garden and greenhouse located next to the Director’s building in the 1950s, and invite the public to help her replant historical flower beds on Toolmakers’ Street. The public is also invited to take part in embroidery workshops of flower motifs on the M3 Crane platform, inspired by stories of the women workers who embroidered during their breaks. Through these activities, the artist commemorates women workers, specifically the pipe insulators who stitched with toxic materials and whose graves Beall will visit, leaving flowers to pay her respects.

Iwona Zając from Gdańsk will present The Broadcast in reference to the pirate Radio Solidarność (Radio Solidarity) which operated during martial law in the early 1980s. At Gate No. 2, she will organise an audience with Piotr Jagielski, who supervised the technical equipment of Radio Solidarność, and with Maciej Pawlak, who was its editor and author of the book “Radio Solidarność in the Tri-City”. During this event, the public will listen to selected archival programmes and the artist’s own recordings of former shipyard workers.

VR in the Shipyard

Swedish filmmaker Jonas Myrstrand will screen his film VR in Shipyard of Gothenburg during the Memory of Water: City Lab. Once one of the largest shipyards in the world, nothing remains of Gothenburg’s shipbuilding past as regretfully all traces of this industrial heritage have been lost. Through his virtual reality film, viewers can experience the sights and sounds of the former shipyard in Sweden. During the residency, he will also document the activities of his fellow artists in the Gdańsk Shipyard to create an artistic documentary film.

Siegfried Vynck from Belgium will create a bespoke mural inspired by the interior and exterior industrial spaces of the Shipyard. Using spray paint, he will repurpose a shipping container as his ‘canvas’ to create a collage of scenes – fragments and snippets of today’s Shipyard – which he encountered on his visit to Gdańsk. The container will be exhibited beside Crane M3, a new destination for locals and visitors to engage with the history and heritage of the site.

As above, so below

Greek artist Ira Brami will work with retired Shipyard employee, Mrs. Urszula Ściubeł, in an experimental promenade performance telling the story of her personal and professional life as a pipe insulator and light crane operator. The performance will involve Theatre Tak and local school children both as audience and participants. The goal of this project is to find creative ways to engage younger people in Gdańsk with the stories of the Solidarity movement and the legacy of the Shipyard.

For more information and event details, you can visit the Memory of Water website here.

14-19 October 2019 Ormston House is responsible for the Artistic Direction of Memory of Water (2018-2020). Our participation is kindly supported by Creative Europe, the Arts Council of Ireland, and Limerick Arts and Culture Department. Photograph of Crane M3 in the Gdańsk Shipyard by Mary Conlon, Artistic Director. For more information, you can visit the project website here.
Back to Programme